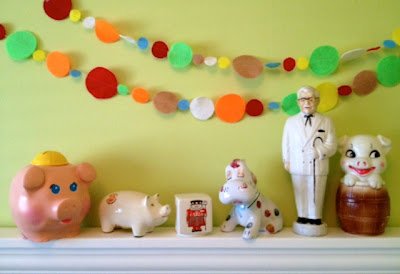 Most of us had a money bank or piggy bank as a child to save for something really special! My first money bank was this dog...he isn't marked nor do I remember where it came from. All I know is it's over 30 years old and still has it's original plastic stopper! 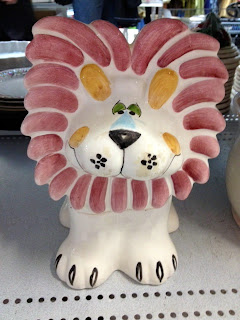 Both my sisters had similar money banks except one was a lion and the other a cow. Recently while thrifting, I spotted this cookie jar that looks identical to KJ's lion bank! I had to snap a picture for her. 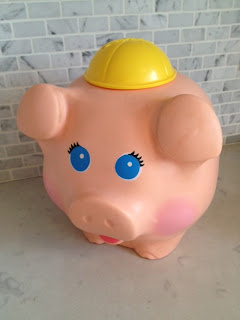 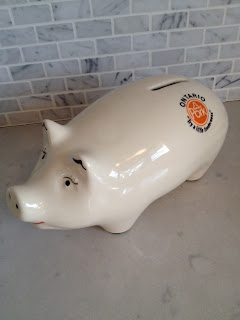 I thrifted this "Ontario Pork Pig" piggy bank made by Decal Artistry by Catterina Hamilton, Ontario Canada. The funny thing is anyone who knows me knows I don't eat pork! but his face is really sweet~ don't you think? 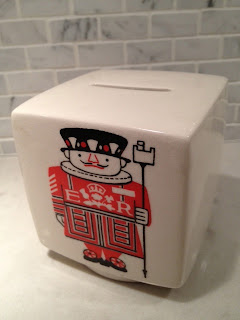 I recently thrifted this ceramic, square money bank created for the Design Centre London. It has a mod design of a Royal Guard on the front and the back shows the Tower of London. It's marked made in England and paid only 99 cents! 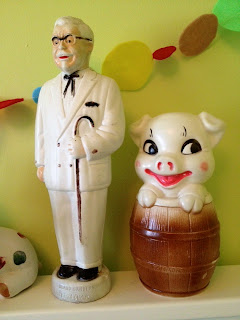 Here is my 1970s Colonel Sanders Kentucky Fried Chicken bank. I purchased him while in university for a quarter at a garage sale! The pig in a barrel I thrifted at VVs last month.

With a cashless society and the penny being phased out (In Canada) do you think money banks will be a thing of the past?